From north to south the coastline stretches ahead unveiling its treasures one after another - white, sandy bays and rugged cliffs, rocky headlands, sand dunes and towering granite boulders, all reflected in crystal clear, emerald waters.

The magnificent Maddalena archipelago, in the north-east of the island, is the symbol of the Sardinian sea, with its transparent waters and the numerous charming bays which ornate the shorelines of the small islands. Cala Coticcio on the island of Caprera is a genuine tropical paradise, while Spiaggia Rosa (so called because of its pink sand), on the island of Budelli, offers visitors a unique image, although access is now forbidden in order to safeguard its outstanding but fragile beauty. Spiaggia di Spalmatore on the island of La Maddalena is another jewel of similar beauty in the archipelago, but it is accessible.

Further south the splendid beaches of the exclusive resort of Costa Smeralda are much busier and in summer they provide the playground for the rich and famous. Among the most well known are the white, sandy beaches of Portisco and Liscia Ruja, as well as the regal beach known as the Prince’s beach of Portu Li Gogghi. A short boat trip will also take visitors to the enchanting beaches on the Isola di Mortorio, while the Spiaggia di Golfo Aranci is the nearest beach to Olbia’s busy harbour, where the numerous ferries connecting Sardinia with mainland Italy arrive and depart every day. Finally there is the very popular beach known as Spiaggia La Cinta, which is a broad half-moon stretch of sand that forms a natural barrier between the sea and the San Teodoro lagoon. 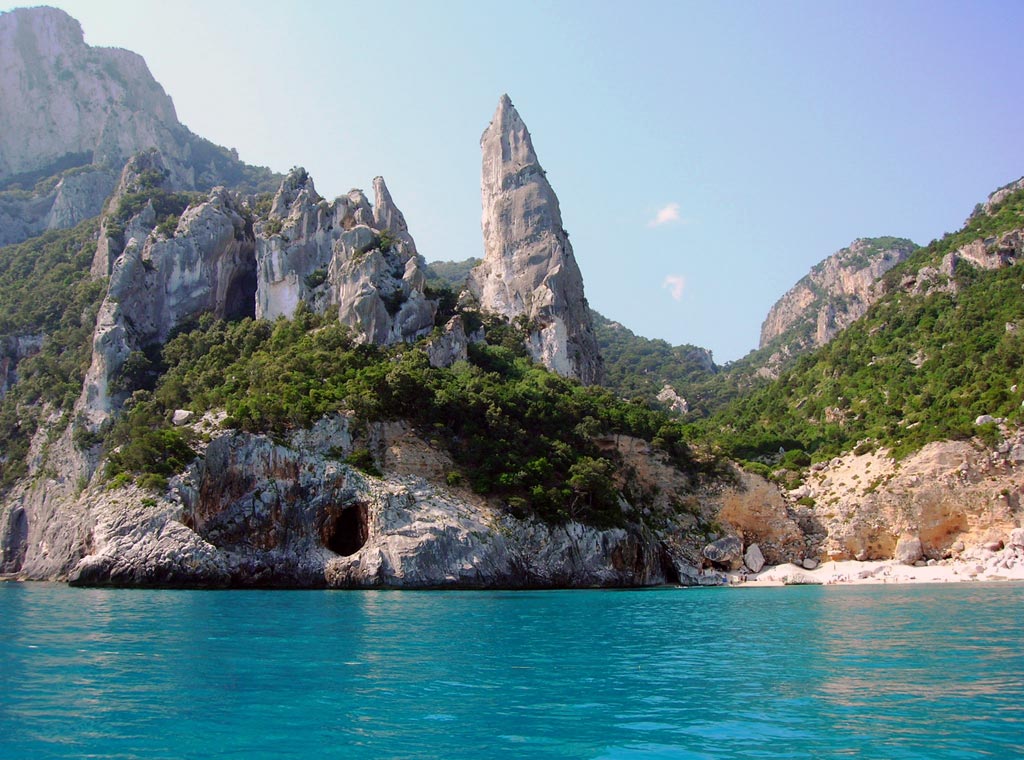 The unmistakable colours of the waters of the Tyrrhenian Sea which gently lap the Sardinian coasts are enhanced in the emerald blue of the Gulf of Orosei, with its towering limestone cliffs and the spectacular spiagge di Dorgali (the most famous beach is certainly Cala Luna, but all are of exceptional beauty). Travelling southwards the shoreline panorama is dominated by the towering, red, porphyry cliffs of Arbatax, until you reach Cale Feraxi, a stretch of almost undiscovered bays in the centre of a fascinating and delicate ecosystem of lagoons and canals. Further south still lies Porto Giunco, with its white sand, which is typical of the limestone rocks and candid beaches of Villasimius.

However, the whole of the island’s south coast offers treasures equal in beauty to the more famous beaches of northern Sardinia, such as Cagliari’s popular Poetto beach and beyond to the beaches of Tuerredda and Porto Pino. Instead, by exploring the south west coast of Sardinia visitors will be rewarded with a series of genuine natural phenomena, such as the sand dunes at Chia and Piscinas, the pink quartz of Is Arutas, and finally the uncontaminated beauty of Pelosa beach at Stintino, which looks out on to the solitary island of Asinara.